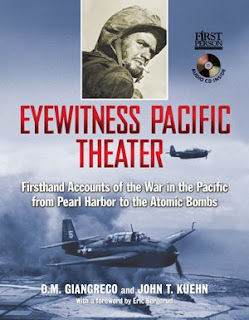 Eyewitness Pacific Theater, firsthand accounts of the war in the Pacific from Pearl Harbor to the atomic bombs. By John T. Kuehn, Commander, USN (Retired) with D.M. Giangreco; foreword by Eric M. Bergerud.

Eyewitness Pacific Theater tells the remarkable story of U.S. operations in the Pacific during World War II by documenting the experiences of the men and women who were stationed there. Written by award-winning author D.M. Giangreco and venerable Commander John T. Kuehn, this volume is illustrated with hundreds of contemporary photos, including wartime pictures of the veterans themselves. Bringing the full force of personal recollections home to the reader, Eyewitness Pacific Theater is accompanied by a full-length compact disc of interviews produced by Emmy Award-winning historical documentarians Rob Lihani and Rob Kirk in collaboration with First Person Productions. Listen to dramatic tales in the voices of the Allied soldiers, sailors, airmen, and medical personnel as they recount the tragedies and triumphs of life during wartime in the Pacific Theater.