Posted by CARL Staff at 3:53 PM No comments: Links to this post

If the moon looks a little bit bigger and brighter this weekend, there's a reason for that. It is.

Saturday's full moon will be a super "perigee moon" -- the biggest in almost 20 years. This celestial event is far rarer than the famed blue moon, which happens once about every two-and-a-half years.

"The last full moon so big and close to Earth occurred in March of 1993," said Geoff Chester with the U.S. Naval Observatory in Washington. "I'd say it's worth a look."

Full moons look different because of the elliptical shape of the moon's orbit. When it's at perigee, the moon is about 31,000 miles (50,000 km) closer to Earth than when it's at the farthest point of its orbit, also known as apogee.

"Nearby perigee moons are about 14% bigger and 30% brighter than lesser moons that occur on the apogee side of the moon's orbit," the NASA website says.

This full moon will rise in the east at sunset and should look especially big at that time because of what's known as the "moon illusion."
"For reasons not fully understood by astronomers or psychologists, low-hanging moons look unnaturally large when they beam through trees, buildings and other foreground objects," according to NASA.

Every wonder about the origins of St. Patrick's Day? If so check out this video it is from our friends at the History channel http://www.history.com/topics/st-patricks-day/videos#history-of-st-patricks-day . Enjoy!
Erin go Bragh!

Posted by CARL Staff at 8:07 AM No comments: Links to this post

Yesterday, a bill was introduced which would abolish Kan-Ed. House Bill 2390 was introduced by the chairman of the House Appropriations Committee (Marc Rhoades, R-Newton) at the request of the Speaker of the House (Mike O’Neal, R-Hutchinson).
This is an important issue for libraries, which rely upon Kan-Ed for affordable and high-speed Internet connectivity, the ELMeR videoconferencing network, research databases (including all K-12 databases and Heritage Quest), Kan-Ed Live Tutor (Homework Kansas), and more. All these things would be lost if the bill passes.
Please contact your Kansas state representative to express your strong support for Kan-Ed and urge him/her to oppose House Bill 2390. It’s uncertain when the bill might come to a vote, but to be on the safe side, please make contacts within one week.
What is the best way to do this? You can find a list of Kansas representatives and their contact information at http://kslegislature.org/li/chamber/house/roster/. Most legislators welcome email messages from constituents, so be sure to include your address or otherwise indicate that you are a constituent. A phone call or personal note may be even more effective.
In your communication, please emphasize the negative impact on library users. Your message should be personalized, but some points to consider include:
Thank you in advance for your effort!
Posted by CARL Staff at 8:28 AM No comments: Links to this post


Daylight Saving Time Around the World 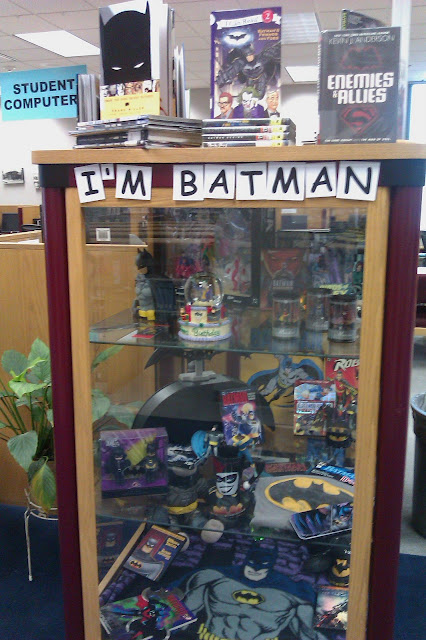 We've changed our display cases again! Be sure to check out our Batman display on the first floor, near the student computers. We've got a lot of neat stuff on display, and above the display case, we have Batman-related DVDs, graphic novels, novels, and books for children!

Posted by CARL Staff at 11:23 AM No comments: Links to this post Theodor Seuss Geisel was born in 1904 and published 44 children's books filled with characters we all love and remember; The Grinch, The Cat in the Hat, Sam I Am, Horton, The Sneetches and the Lorax, to name a few.

He attended Oxford briefly, and after returning to the US, submitted humorous articles and illustrations to publications like The Saturday Evening Post, Life and Vanity Fair. During the depression he drew advertising for General Electric, NBC and others.

In 1937 the rhythm of the ship's engines on his ocean voyage inspired what became his first book, And To Think That I Saw It on Mulberry Street! It was rejected by dozens of publishers before it saw print.

During World War II, Theodor Geisel drew over 400 political cartoons and eventually becgan drawing posters for the Treasury Department and War Production board. He joined the army in 1943 as the commander of the Animation Department of the First Motion Picture Unit of the United States Army Air Forces.After the war, he and his wife moved to California and he returned to children's books.


As kids, many of us have seen Dick and Jane and Spot, and some of us were more motivated to read by their antics than others. Around 1950, a friend presented him with a study that showed many kids were having trouble learning to read because the books they were given were just plain boring. Dr. Seuss was able to fill the void with the classic The Cat in the Hat, which came in at a meager 236 words, all of which were easy for beginning readers to tackle. Later on, a friend gave him a challenge to write a book with only 50 different words in it, which is where Green Eggs and Ham came from.

After his wife's death in 1967, he remarried a year later and continued writing until his death from cancer in 1991. He had no children of his own, and when he was asked about this, he'd say "You have 'em, I'll entertain 'em."

To learn more, check out Oh, The Places He Went, a digital biography downloadable from our catalog!

We hope to see you today at 4 PM for our special Dr. Seuss story time!

Posted by CARL Staff at 9:55 AM No comments: Links to this post