Posted by CARL Staff at 9:55 AM No comments: Links to this post

CARL's Website will be unavailable for an hour on Friday Aug 19th starting at 1600 for server maintenance. We apologize for any inconvience. If you access here are some helpful links.

A Book review by Erin Mckean. John McWhorter's "What Language Is (And What It Isn't and What It Could Be)" challenges our text-centric views, introducing us to many an odd language bird. Mr. McWhorter, who teaches at Columbia University and is a contributing editor at the New Republic, wants us all to look at the phenomenon of language from the linguist's perspective, and toward this end he outlines five characteristics that all languages share.
First, they're "ingrown," in that they have developed organically, including convolutions—such as grammatical gender—that aren't strictly necessary for communication. Languages are "disheveled," in that they are messy and illogical (in both the "I see/you saw" irregular-verb sense and the hokey "why do we park on a driveway but drive on a parkway?" sense). Languages are "intricate," in that even the languages we consider "simple," such as creoles, have rules that utterances must follow to be considered grammatical. Languages are primarily "oral," in that the living form of all language is speech, not writing. And, finally, all languages are "mixed": Every language shows at least some signs of having been influenced by the neighbors (or invaders) of those who speak it. No language is "pure."
You might have noticed by now that the keywords Mr. McWhorter has chosen to mark "language-ness" spell out the word "idiom"—which is apt, in that idioms are the parts of language that are the most ingrown, disheveled, intricate, oral and mixed. (Idioms couldn't care less about being grammatical, orderly, regular or pure.) 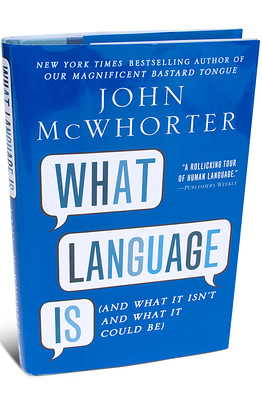 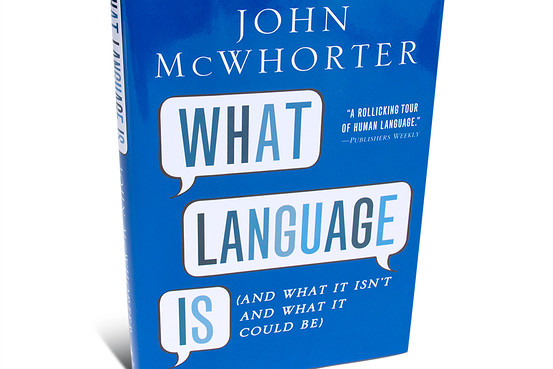 By John McWhorter
(Gotham, 228 pages, $26)
Mr. McWhorter walks through his five signal characteristics of language with a spring in his step and armed with a vast collection of interesting—and convincing—examples, drawn not only from English but from Arabic, Mandarin and lesser-known languages such as Tukang Besi (spoken on the Indonesian island of Sulawesi) and Twi (spoken in Ghana). Some of the exemplars of the baroque "ingrown" languages are so complicated (from an English speaker's point of view) that it makes you wonder how anyone ever holds a conversation in those languages at all.
To conjugate a verb properly in Berik, a language of New Guinea, you must know how big the object was, whether it was high or low, how far away it was and the time of day the action was undertaken. But at the same time, Berik has no plural pronouns other than "we." (Oh, and "nice to see you" in Berik? It translates in English as "My gall bladder is really warm today.") Mr. McWhorter gives an easy rule of thumb for determining whether something in a language is "grammar" or not: If a native speaker can't explain why a certain construction is used, other than to shrug and say "I don't know, that's just how it's said!"—that's grammar.
"What Language Is" isn't another "oh, that wacky language!" book; its mission is far broader than just to give a tour of other languages' customs and habits. The crux of the book is Mr. McWhorter's insistence (shared by most linguists) on the oral language as the living, breathing language. He shows that most pedantic objections to language change are due to our insistence on holding on to the fixed form of the written language—fixed, that is, at some point just after we became competent writers and just before some change that we dislike.
Our insistence on the standardization of written language creates weird pockets of inconsistency. Ready to defend until your last breath the distinction between "lie" and "lay"? Why not also argue for "pease" as the singular form of those "spherical, typically green seeds of the plant Pisum sativum" (in the words of the Oxford English Dictionary) and abandon the error, dating to the 1600s, that is "pea"? We're happy with "alone," although it was originally "all one"—but we don't like "alright," which could be formed by the very same process from "all right."
Mr. McWhorter is intent on refuting what he sees as the Indo-Europeanized, textbound perspective that blinkers our understanding—and appreciation—of language. Do you think Black English is a "dialect" full of "mistakes"? You're likely to change your mind about its "languageness" after reading Mr. McWhorter's careful explanation of the similarities between Black English and Modern Hebrew—both being slightly simplified versions of their "parent" languages, Standard English and Biblical Hebrew. Do you think of Spanglish as an accidental byproduct of immigration? Mr. McWhorter explains why, linguistically, it would be incredibly unusual if we didn't hear Spanish interwoven with English words in the United States—in much the same way as English speakers picked up French words after the Norman invasion.
We like to think that human languages should be more like computer-programming languages: logical, orderly, efficient and goal-oriented. But they are more like our own DNA: complicated and full of junk information but at the same time gloriously mutable, able (for good or ill) to give rise to new living forms.

Posted by CARL Staff at 7:44 AM No comments: Links to this post